I am so glad that I  learned how to circle and use loop reins while I am going around like a big dog.  Geez !  I am training my 4 year old mule -- Chester Gibbs - a little doll baby.

Have done tons of ground work - mules are so smart and catch on so fast that it is almost scary.  So, anyway, he  is my big buddy - comes when he is called and follows me around everywhere.  We are stuck to each other like glue.

He has been testing me in a big way the past 2 days and a few times last week.  That is just what equines do - but each time I have stepped up to the plate and the behavior resolved itself.

He is still very young and immature and, like a kid, gets cranky and wants to do just what he wants.

Well, yesterday I got the cojones to ride him - about two 10 minute rides - he was quite good - oops, forgot to mention that the first ride he spun me around like a top but then we did get everything sorted out.  So, basically 2 nice rides -- cool !

Today rode the little bugger for about 10 minute and he was freaking amazing - turns at the lightest touch, stops on a dime, etc.  A couple hours later I wanted to ride him again - can you say NIGHTMARE !!!!!  It's been a long time since I have had that kind of fear - and I am not happy that it has  re-visited  me again.

Todays  second ride - right at the git-go - started immediately with  a buck - I grabbed and spun him around on the left side and round and round we went and then he stopped - and I got off because I was scared s--tless.

But I know that that is a very bad thing to do because he wins, meaning that I have permanently lost.  So, get up there time the second time  - same thing a buck and circling  - got off again.  Not good.

So, get up there 3rd time and we are at it again -  I tried to turn him to the right - forget that - he is so strong that I would need a come-along to turn him - so quick as a fly, we went back to the left and then he stopped and I got off again.

I know I have to get this job done right and I am very afraid but I had better do it.

Alas, got on him the 4th time - Chester was good as gold for a spell but then he had the crazies again.  .  I had serious white knuckles going on but figured I HAVE to ride this mess out, and while I am still on him I NEED to get him to calm down - well, it worked for a few seconds really nice but then we started the crazies again - same ride still - FORCED, FORCED, FORCED myself not to get off  but to  keep riding it out - which I did - he became calm again - I am still scared to death - but we rode calmly doing the "walk-stop" exercise about 9 times and then I got off on a good note. And breathed !

I am not real happy about this obviously and I have a feeling that this is going to take at least half a dozen more rides until we get this sorted out - meaning I have to control that darn fear again - each time - whew !!!

Such is the lovely world of equines !!! 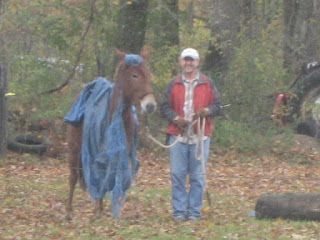 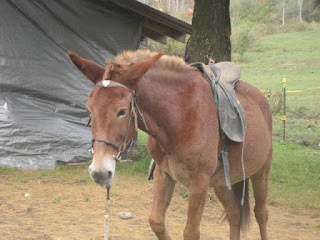